Ladies to Steal Your Heart: A Historical Regency Romance Collection 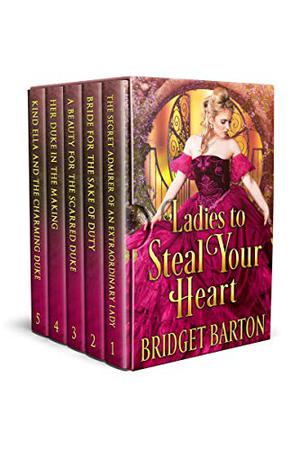 5 of my best-selling Regency romance stories!

The Secret Admirer of an Extraordinary Lady
When Lydia receives letters from a secret admirer, she begins to dream of fairytales and happily ever afters. But when she discovers the sweet side of her childhood friend, Anthony, she finds herself trapped in a dilemma. Anthony has found pleasure in teasing his best friend's little sister. But, when one day he takes it too far and she walks off leaving him standing in front of the crowd, embarrassed and furious as he is, Anthony starts plotting his revenge, until the moment he realizes his heart beats only for her. Will he manage to make up for the chaos he has created? Will they follow their instincts and find their path to true love?

Bride for the Sake of Duty
Eleanor has wished for true love ever since she was a little girl, but she has no other choice but to marry a man she knows nothing about, due to her father's definite will. To make matters worse, her new husband leaves right after their nuptials for a trip overseas. When he returns after two years, he's even more handsome than she remembers, but he still remains a complete stranger to her. Now that he is finally back home, Eleanor's husband, Miles will find himself longing for something more than the sea. Will he finally find a place to call home in Eleanor's eyes? Could Eleanor and Miles make up for the lost time and eventually fall in love?

A Beauty for the Scarred Duke
When the Earl of Upperton sells off his daughter Isabella as a bride for the disfigured Elliot Covington, Isabella feels terrified. Due to marry a man she has never met and whom she has believed to be a monster, she truly believes her life is over. What she has yet to discover, though, is that beneath the scars, there is a caring and kind gentleman. Isabella starts seeing Elliot's inner beauty, but the moment they both realise they are meant to be together, outside powers will try to tear them apart. Will the Duke be able to let go of the pain and guilt that has swallowed him whole? Will two heartbroken souls find love when least expected?

Her Duke in the Making
Anne believes to have found her other half until she finds herself obliged to prepare the new Duke of Somerset for his first Season. The handsome Duke, who has recently returned from America, has to adjust to a new lifestyle and be taught proper British manners. Luckily for him, Anne agrees to be his mentor, but with a condition; he will need to help Anne convince her family that Lord Rawley is the perfect match for her. Their plans will take an unexpected turn, though, when the Duke falls hopelessly in love with the enchanting woman and realises that it might be destiny that brought them together. Could Anne's unusual agreement with the dashing Duke lead to more than she ever dreamt of?

Kind Ella and the Charming Duke
After her father's death, Ella is devastated when her mother marries the Earl of Dandridge.The Earl is the cold hearted father of two spoiled young ladies in search of a suitor. When Rufus, Duke of Hillington, is reported to be searching for a suitable bride, the Earl will plot the most appalling schemes to hide Ella away. Ella's rebellious heart makes her defy the orders to abstain from the Duke's masquerade ball. After encountering the mysterious lady, Rufus cannot take his mind off of her. Will Ella and Rufus escape the Earl's evil plans? Will they eventually have the happily-ever-after they both deserve?

If you love clean Regency romances that feature dynamic and inspiring women of the era and determined, yet charming, male protagonists, then you are going to love this collection!
more
Amazon Other stores
Bookmark  Rate:

'Ladies to Steal Your Heart: A Historical Regency Romance Collection' is tagged as:

Similar books to 'Ladies to Steal Your Heart: A Historical Regency Romance Collection'

Buy 'Ladies to Steal Your Heart: A Historical Regency Romance Collection' from the following stores: