Under the Duke's Wicked Spell: A Historical Regency Romance Book 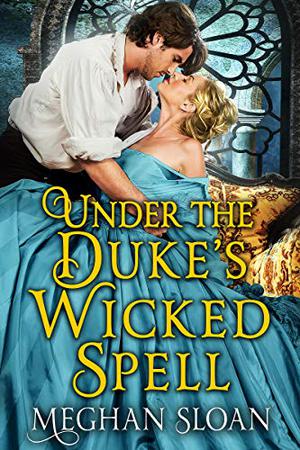 Charlotte Stanton has never believed in magic. When a dear friend drags her to the site of a traveling mystic, the last thing she expected to hear was the outlandish prophecy of her cousin's end. Finding this vision to be completely foolish, she decides to ignore it, but the following fateful morning, this very nightmare comes to life... Wracked with guilt for not preventing this tragedy, she will soon be caught in a world of threats and drama, as she is the prime suspect in a crime. However, a chance to rise above that horror comes in the form of an alluring duke, who appears mysteriously to awaken her fiery nature... Can Charlotte trust the seducing man now that her life is almost shattered into a million pieces?

Jeffrey Lilley's past was not a bed of roses. Despite appearing courteous and calm, a dark secret is hidden behind the reason he's keeping everyone at distance. Rumours surrounding his brother's enigmatic loss have left him desperately seeking revenge and vindication. When he encounters the ravishing Charlotte banging on the locked door of a magician, he starts wondering whether she knows far more about his traumatic past than she's letting on. The whip-smart and attractive lady immediately steals his heart and fills him with lust, but their union will soon turn into an endless hunt for the truth. With their dark secrets well buried, will they ever let each other close enough to meet the passionate future they could have together?

Charlotte and Jeffrey felt completely lost before their pathways crossed, but now they are consumed by irresistible desire... Regardless of their fire burning hotter with every passing minute, there are far too many overshadowing threats that still linger around them. Will their relentless and passionate connection prove strong enough to shatter the unforeseen obstacles? Or will their journey to discover the true culprit tear their worlds apart forever?

"Under the Duke's Wicked Spell" is a historical romance novel of approximately 60,000 words. No cheating, no cliffhangers, and a guaranteed happily ever after.
more
Amazon Other stores
Bookmark  Rate:

'Under the Duke's Wicked Spell: A Historical Regency Romance Book' is tagged as:

Similar books to 'Under the Duke's Wicked Spell: A Historical Regency Romance Book'

Buy 'Under the Duke's Wicked Spell: A Historical Regency Romance Book' from the following stores: