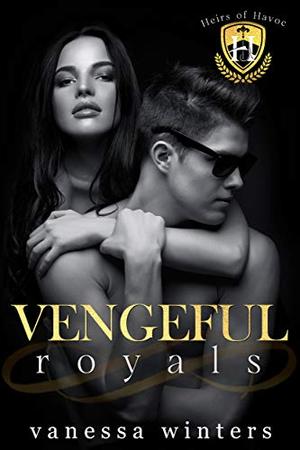 When you make powerful enemies, there’s always a price to pay…

American royalty Jude Carlisle and fiery, independent Brooklyn James, have overcome so much, they’re ready to just enjoy the sweetness of finally being together.

But pairing a girl who’s worked for everything she’s ever had, with a guy who’s used to getting everything he’s ever wanted, makes for a bumpy road toward happily-ever-after.

And even though they might be ready to let go of the past, there are other’s who won’t.

Others who are waiting. Watching. Planning.

And as they set their game in motion, Jude and Brooklyn will be faced with an unbearable choice.

Because sometimes, to save the person you love, you have to sacrifice yourself…

VENGEFUL ROYALS is the FINAL BOOK in the Heirs of Havoc Series. A dark bully romance intended for readers 18+. This book contains dark themes, including abuse, violence and sexual relationships that some readers might be uncomfortable with.
more
Amazon Other stores
Bookmark  Rate:

'Vengeful Royals: A Dark College Bully Romance' is tagged as:

The 'Heirs of Havoc' series

All books by Vanessa Winters  ❯