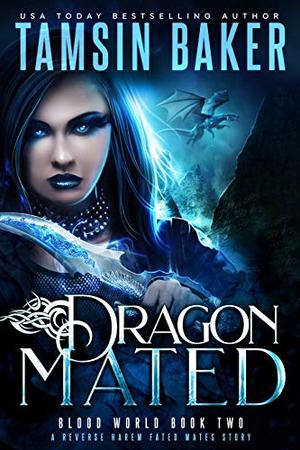 Sadie, Rogan and Fridge are working together and hot on the trail of the Vampire who killed Sadie’s father. Finally, clues seem to be adding up and they are making headway... but things aren’t easy. Fridge, Sadie’s dragon-shifter mate has deep-seated commitment issues, while Rogan, Sadie’s wolf-shifter mate wants to become the best family unit around.

When a vampire assassin Sadie assumes is her father’s killer kidnaps her and ignites a mating-bond, she’s in real trouble. Not only that, but he wants to join their triad!

Can the three men get along as they continue their quest to find a killer and take apart the Blood Ring that would capture Sadie and drain her life?

Or will the Blood World politics destroy them all?

Dragon Mated is the second story in the Blood World trilogy. Featuring Vampires, Shifters and a covert Witch. This story is packed with action, adventure and a steamy why-choose Reverse Harem romance between two bounty hunters, an ancient Vampire and a woman with the rarest blood in town.

*** Author warning- there will be a cliffhanger ending to this book!
more
Amazon Other stores
Bookmark  Rate:

All books by Tamsin Baker  ❯