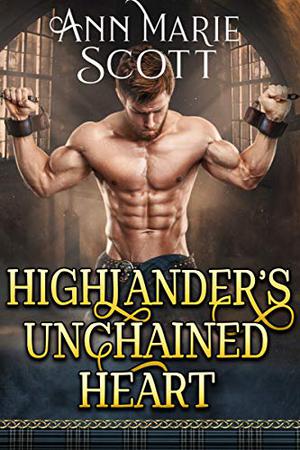 She unchained his body. Now she has to win his heart.

While in a state of rage after the slaughter of innocent members of his clan, Arran Mcaiwn decides to battle the McDougals and avenge his people’s deaths.The infuriated and fearsome giant fights like mad but is captured by the enemy, and when he realizes that his fellow warriors are dead, he is consumed by guilt for not being able to protect them.Abandoned, wounded, and chained in a dungeon, Arran is about to die from his infected cuts when a mysterious woman healer appears. Ainslee lives alone in the woods, yet the power she has over people in the castle suggests that there is more to her than meets the eye. Ainslee knows that she will only save Arran for him to be tortured and then properly executed… But maybe the wounded enemy Laird is the solution she has been seeking for a long time while hidden in the dark. Arran’s spirit can not be bend, and while trying to find a way out, he wonders if he can trust the mysterious woman. Her help though comes at a cost; if she saves him, he will have to take on the most dangerous task of his life to protect not one but two clans…"Highlander's Unchained Heart" is a standalone story by best-selling author Ann Marie Scott, packed with mystery, passion, and romance, set on the beautiful backdrop of the Scottish Highlands. Get your copy TODAY for 99c OR FREE with Kindle Unlimited!
more
Amazon Other stores
Bookmark  Rate: