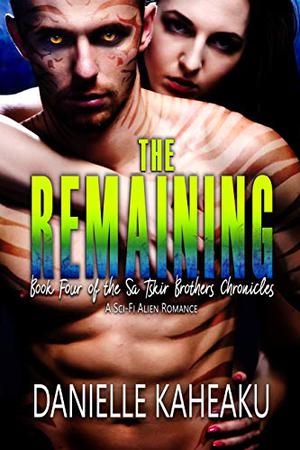 Samantha thought life could not possibly get any stranger. Six months ago, she had been abducted during a girl’s weekend in Vegas and whisked away to the stars where the feline-like alien Sa Tskir brothers battled for her interest before escaping back to Earth with both men at her heels.

Things seemed to settle down as Samantha's best friend Carly snags the eye of the younger alien Krissik and Samantha is able to enjoy the full attention of the sexy and ex-solider turned weapons-smuggler Rikist while running her late father's ranch.

Yet while playing house and acting as the resident alien wrangler, a pregnant Samantha must deal with surfacing secrets and conspiring government agencies wishing to turn her weapons-smuggling lover to their side of the war, bringing both danger and mistrust into their lives.

When Rikist makes a terrible mistake that threatens the slice of heaven their makeshift family has struggled to create, Samantha must step up to keep those she loves alive as dark forces invade Earth’s soil for a nefarious purpose no one could see coming.
more
Amazon Other stores
Bookmark  Rate:

'The Remaining: A Sci-Fi Alien Romance' is tagged as:

Similar books to 'The Remaining: A Sci-Fi Alien Romance'

More books like 'The Remaining: A Sci-Fi Alien Romance'   ❯

All books by Danielle Kaheaku  ❯

Buy 'The Remaining: A Sci-Fi Alien Romance' from the following stores: