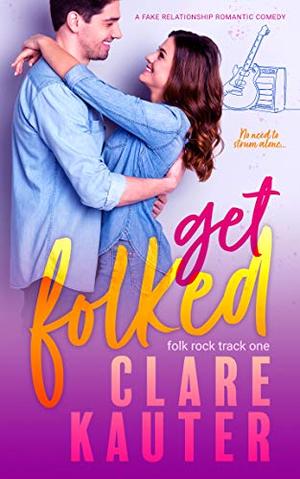 A fake relationship with the lead singer of my favourite band – who thinks I’ve never heard his music. What could possibly go wrong?

When pictures appear online showing folk-rock star Cole Brooks lying on top of me in a local park, my world gets a little wild.

No one seems to realise that our entanglement was the result of a high-speed jogging collision. Nope. They think it’s evidence that Cole has changed his tune on his whole ‘love isn’t real’ schtick.

His manager suggests that we keep up the fake-dating thing for the publicity, and my bank account’s not in a position to refuse.

But the more time I spend with him, the less it feels like we’re faking. And that’s not good.

Because the thing Cole likes most about me is that I’m not caught up in the hype.

I’m his biggest fan – and he doesn’t have a clue.

Fall in love and laugh out loud with Cole and Dannielle in this sexy romantic comedy. It’s book one in a series, but it can be enjoyed as a stand-alone romance. Not that you’re going to want to stop at one.

Order your copy now to devour this book ASAP.

'Get Folked: A fake relationship romantic comedy' is tagged as:

Similar books to 'Get Folked: A fake relationship romantic comedy'

All books by Clare Kauter  ❯

Buy 'Get Folked: A fake relationship romantic comedy' from the following stores: