Seduced By The In-Laws: A Steamy 2 Book Mother/Sister In Law Lesbian Romance Box-Set 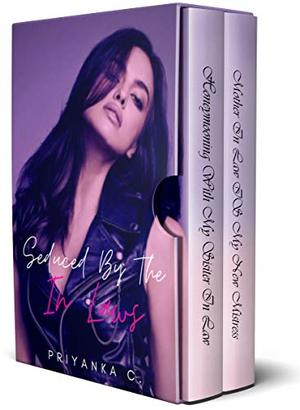 What If you found out your mother in law has the hots for you?

What If you found out your sexy sister in law wants you more than you want her?

This is a 2 book Lesbian Romance/BDSM Box-set with two books that tell the tale of a woman in Scotland seduced by her sister in law, and a shy newlywed dominated by her mother-in-law. Hot, passionate and with engaging storylines, the queen of lesbian romance, Priyanka C's latest offering is all about lesbian love from the in laws! Enjoy!

Synopsis of the two books -

① Honeymooning With My Sister-In-Law

David and I had been together for 10 years before we decided to get married. But in those 10 years, he had changed a lot, and so, when he told me, in the middle of our honeymoon, that he had to leave me because of work, I wasn't much surprised.

The only good thing he did before leaving me stranded in Edinburgh, was introducing me to his baby sister, the gorgeous, hot as hell, Trisha Smith.

I realized we shared a lot of intersts, and I also realized I was hopelessly attracted to her, and so, I decided to complete the rest of my honeymoon with her, but with a twist!

② Mother-In-Law Is My New Mistress

I had always been a socially awkward, nervous young girl, who always fell for the dominant, Alpha type guys, and that is why I fell in love with my husband, Steve. Our romance had been a whirlwind, and we got married within an year of courtship.

And that is when my husband told me it was time to pay his mother a visit.

Little did I know, she was a bigger Alpha than him, a woman who was the hottest 40 plus year old I had laid eyes on, a woman who had a basement full of girls she had seduced.

Would I become a part of that basment full of girls?

'Seduced By The In-Laws: A Steamy 2 Book Mother/Sister In Law Lesbian Romance Box-Set' is tagged as:

Similar books to 'Seduced By The In-Laws: A Steamy 2 Book Mother/Sister In Law Lesbian Romance Box-Set'

Buy 'Seduced By The In-Laws: A Steamy 2 Book Mother/Sister In Law Lesbian Romance Box-Set' from the following stores: