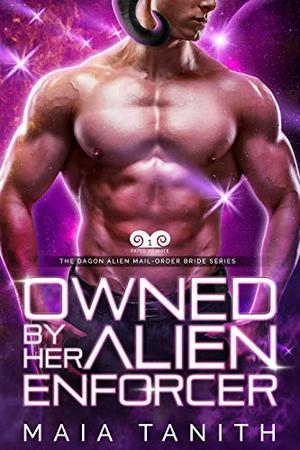 Lose yourself in the world of the Dagon aliens - where the men are muscled, horned, and hell bent on finding their one true mate.

Molly hadn’t planned on becoming single, jobless, and homeless all within days of her twenty-first birthday. But here she is.
Her boyfriend has left her for his pregnant side-chick, and she has debts that will cost her life to repay.
There is only one way out of this mess of a life she’s created on Earth.
Cupid’s Corner - the intergalactic mail order bride service that promises to pair fertile earth women with a handsome claw-man, the aliens famous for their protective instincts and good looks.
Molly had always promised herself she’d never be this desperate. But perhaps leaving Earth to forge a new life with a handsome, loving alien is going to be the easiest way to solve her problems.
There’s nothing left to lose, is there?
Even if Cupid’s Corner ends up being somewhat less than reputable.
And even if one of the muscled, intimidating aliens guarding the horde of mail order brides seems to have a crush on her.
Molly knows the life she wants. Find a nice-enough alien mate, settle down, raise alien children, be safe and secure. Love and desire don’t factor in this equation.
No muscle-bound alien named Hazard is going to stand in her way. Not even if he can offer her what she truly desires. Him.


Hazard is close to giving up hope that he will find his true mate - the one and only female with whom he will ever pair. He has taken up work in security in order to travel the world - and get all the more opportunity to find her. Years have passed, with no hint of her.
Then one day he catches her scent. His one true mate. He’s found his one in a billion. Only problem? She’s on board a mail order bride ship bound for Xill. And he’s under strict instructions not to mess with the merchandise.
She might be set on marrying a claw-man, but Hazard has other plans for her. He has only a short time to convince her that he is the one for her.
No matter that his jealous colleague is hell bent on driving them apart. And no matter that he’s unintentionally playing a role in the biggest betrayal of Molly’s life.
He will win her heart, no matter the cost.

The latest from Maia Tanith will have you lost in the world of handsome aliens looking for their fated mates.

Don’t miss a new release - follow Maia Tanith on Facebook or sign up to the Maia Tanith newsletter and we’ll keep you updated with all new novels and freebies.
more
Amazon Other stores
Bookmark  Rate:

'Owned by Her Alien Enforcer: Fated to Mate' is tagged as:

Similar books to 'Owned by Her Alien Enforcer: Fated to Mate'

More books like 'Owned by Her Alien Enforcer: Fated to Mate'   ❯

All books by Maia Tanith  ❯

Buy 'Owned by Her Alien Enforcer: Fated to Mate' from the following stores: