Midlife Magic: A Paranormal Women's Fiction Novel (Not Too Late #1) 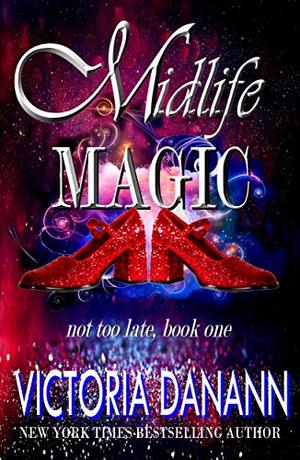 For all no-mercy heroines over forty!

The day after my forty-seventh birthday, my husband announced he was trading me in - his words, not mine. The news was unwelcome at the time, but honestly? I needed a good goosing to get up and find my way to the door.

So. I was freed from the giant manual of expectations authored by my ex. That was the good news. The flip side was less happy. Due to living in a state not friendly to discarded wives, I was also relieved of the financial 'security' I'd spent a lifetime accruing.

Starting over? I didn't plan on it. Didn't see it coming. But pulling a sheet over my head and waiting for the end didn't seem like my style. Granted. I wasn't sure what my style was because I hadn't thought about freedom of expression since I was twenty.

I'd never been a fan of optimistic adages like 'it's not too late', but that was before my life was divided into two parts; everything that came before the shoes and everything after. The red shoes shot me with a lightning bolt of attitude adjustment and thrust me head first into an adventure that was unforeseeable to say the least. If you'd told me what my life was going to be like, I would have used every synonym for crazy you've ever heard.

By day I manage the curious goods shop I 'inherited' in a tiny, picturesque English village with where the world of magic lives side by side with the mundane. By night I receive magical dignitaries and magical lowborn alike for the mediation of disputes. Odd or not, some of the most attractive figures imaginable are finding me and my magical authority sexy.

It may be too late for super shiny hair, going without a bra, or sleeping eight hours without a potty break. But it seems that it's not too late for navigating magical politics, expatriating, romance, and saving the world.

If you can imagine yourself as a romantic and adventurous woman in midlife, who's come into her power and ready to claim a slice for herself - this Paranormal women's fiction book is for you.
more
Amazon Other stores
Bookmark  Rate:

'Midlife Magic: A Paranormal Women's Fiction Novel' is tagged as:

The 'Not Too Late' series

Wednesday
Wednesday
(The Witches of Wimberley #3)