Thrown to the Lions: The Complete Series 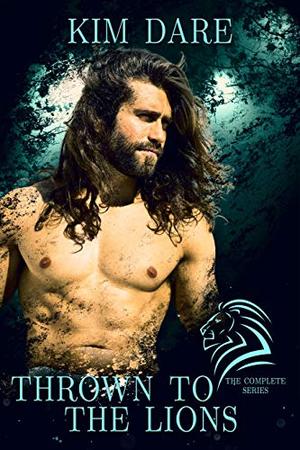 Four men have agreed to be thrown to the local pride of werelions. Each man might have had a different motive when he first applied for the position of willing human sacrifice, but one thing is guaranteed—once a man is delivered, bound and naked, to the lions' doorstep, he’s destined to receive far more than he ever bargained for.

And, as for the lions who accept those sacrifices—from the leader of the pride, all the way down to the gentlest cub, they're about to find out just how much trouble humans can be.

This volume contains all four stories from the Thrown to the Lions Series: Ryland’s Sacrifice, Marrick’s Promise, Ellery’s Duty and Cameron’s Pride.

Principles don’t pay tuition fees. When Ryland’s doctoral maths scholarship disappears overnight, he has two choices. He can borrow money from fellow student, Jason Burrows, who has very interesting ways of collecting debts. Or, he can volunteer to be thrown to the werelions.

One night spent playing the part of a willing human sacrifice to the local pride will give him enough money to finish his PhD. It seems like a good deal—right up until the moment he finds himself naked, blindfolded, bound and surrounded by lions.

Marrick thinks that being thrown to the lions will be the ultimate adrenaline rush, and he’s not disappointed. But his plan is to try everything life has to offer once. He has no intention of visiting the lions again.

Blaine and Luther don’t expect to give any of the human sacrifices they share another thought once they leave the den. But this man is different. They have no intention of letting this one go.

As a well established dom, Ellery has been watching subs from the local leather scene disappear into the lions’ den for years, but he’s not convinced that everything is as fine as they all claim it is. He’s determined to find out what is really going on. And, if the only way he can do that is to volunteer to be thrown to the lions himself, so be it.

Kefir’s never worked out what the other lions find so interesting about the human sacrifices who visit their den, but this new man is unlike any other human he’s ever met, and Kefir’s captivated. Can the smallest lion in the pride claim a man like Ellery as his pet—and is that even the way Kefir wants to think of his human mate?

Franklin knows the way the game is played. It’s the man with the money who calls the shots, and Franklin has plenty of money. When he sees a beautiful lion shifter called Caramel dancing on the stage at his favourite club, he doesn’t hesitate to reach for his wallet. And, when Caramel disappears before he can even open negotiations, he’s quick to pay a fortune in order to be thrown to the only pride of gay werelions in the area so he can find him.

Cameron’s been living without a pride for years, doing whatever it takes to survive. Dancing in clubs, and doing whatever the guys who throw money at him want him to do in the alleyways behind those clubs, hasn’t given him the best opinion of humans. All he knows for sure is that the rich ones are the worst.

The pride is determined to track down the lone lion that’s living in their territory and bring him safely under their care. But is it too late for Cameron to find a sense of pride—and even if he does, will he ever feel safe enough there to let a wealthy man like Franklin into his life?
more
Amazon Other stores
Bookmark  Rate:

'Thrown to the Lions: The Complete Series' is tagged as:

Similar books to 'Thrown to the Lions: The Complete Series'

More books like 'Thrown to the Lions: The Complete Series'   ❯

All books by Kim Dare  ❯

Buy 'Thrown to the Lions: The Complete Series' from the following stores: