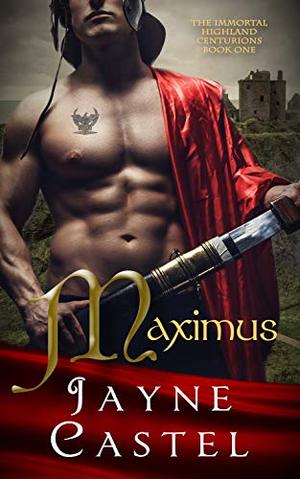 A Roman centurion doomed to an immortal life. A courageous Scottish widow with an uncertain future. One night of passion that changes everything. High adventure and epic love in Medieval Scotland—with a touch of fantasy.

Maximus Flavius Cato should have died in 118 AD—the year the Ninth legion was lost forever in the wilds of Caledonia. Instead, a Pict druidess curses him and two others with immortality. Over a thousand years later, as he struggles to solve the riddle that holds the key to breaking the curse, Maximus has an encounter with a comely tavern wench. His immortal life will never be the same again.

Heather De Keith has made a lot of mistakes—but marrying a bad man was her greatest. After her husband never returns from battle, she’s forced to take up work serving ale in a local tavern. Stubborn pride prevents her from returning to her kin at Dunnottar Castle. But when an enigmatic stranger comes to her aid one evening in the tavern, Heather lets attraction overrule good sense. The night they spend together spurs her to make the decision she’s put off for too long. It’s time to go home.

Pursued by a vengeful laird's son, Maximus and Heather flee north to Dunnottar. However, once on the road, they soon realize that neither of them will finish this journey with their hearts unscathed.

From the author of the Amazon bestselling Brides of Skye and The Sisters of Kilbride series comes an exciting new Historical Fantasy Romance series about three immortal warriors and the brave-hearted Scottish women who will change their lives forever.
more
Amazon Other stores
Bookmark  Rate:

'Maximus: A Medieval Scottish Romance' is tagged as:

The 'The Immortal Highland Centurions' series

Awoken
Awoken
(The Sisters of Kilbride #2)

All books by Jayne Castel  ❯

Buy 'Maximus: A Medieval Scottish Romance' from the following stores: