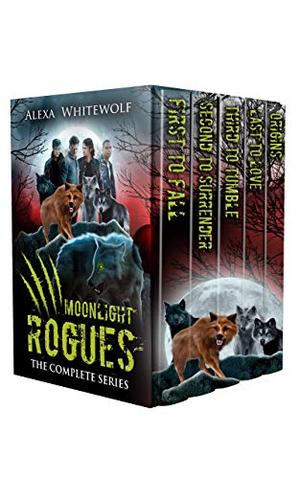 Welcome to Rockland Creek, where pack bonds will be tested, friends will butt heads, and love will prevail...no matter the odds.

What happens when four alpha wolves land in one town, and a fairy godmother decides to play matchmaker? Chaos, of the best kind.

Dominic Kosta never belonged - now he only wants Lucrezia. But can this human be the happily ever he’s craved? And can he protect her when the town comes under attack by mysterious forces?

Tristan Cayne left the last of his sanity somewhere in the jungles of Brazil, fighting creatures of the night as part of a special ops squad. Now, back in the real world, the nightmares have followed him home. When Daniela shows up back in his life, can she help him heal? Or will her dysfunctional family come between them?

Finn McConnell - rule follower, exiled lawyer, and mediator in a pack that seems intent to tear itself apart. What happens when he throws caution to the wind for pretty girl-next-door Elle? And will her own secrets add fuel the to the fire…quite literally?

Lucas Bianchi - enigma, top alpha, and on everyone’s black list. The last thing he needs is the beast inside him going haywire, and Monica prancing in his office. She’s a reminder of a past he’d like to forget… But it’s hard, when the people in it are determined to draw him back in.

A completed paranormal romance shifter series filled with werewolves of all kinds, feisty females who stand up to them, and enough suspense to make it interesting. Boxset also includes the Origin stories of each wolf!
more
Amazon Other stores
Bookmark  Rate:

All books by Alexa Whitewolf  ❯