by Alexis B. Osborne 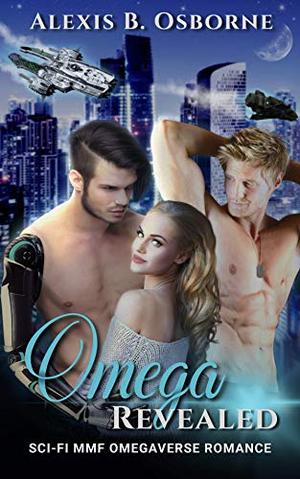 This workplace meeting just got hot.

Beth is in the middle of an important meeting at OAN Global Tech when her heat suppressants fail. She’s hidden her omega status for years only for them to stop working at the absolute worst possible time. When her Alpha boss takes her hostage it’s up to the head of security, Finn, and his beta lover and second-in-command, Holden, to defuse the situation.

The problem? She really likes the way they smell.

Their love was forged in fire, bloodshed, and tears.

After surviving their stint in the military and capture by the Theta-dev aliens both Finn and Holden have settled down into civilian life. In between alien attacks everything is great. They have each other, their friends, and their work at OAN, but then they answer a security alert and find more than they’d expected.

The woman they’re sent to rescue isn’t a beta like her file says. She’s an omega, and she’s in heat.

Beautiful, sweet, delicious Beth. She fits between them perfectly, all soft curves and fertile omega.

Is it possible to take something amazing and turn it into perfection?

Omega Revealed is a 62K sweet & ultra steamy Sci-Fi MMF Omegaverse romance novel. There are MM, MF and MMF scenes inside. All of this series’ books can be read as a standalone. There’s zero cheating, and a HFN / HEA ending is guaranteed with every book. These books are 100% alphahole free! If you like your chocolate on the lighter side and your romance steaming hot then take a bite out of this one.
more
Amazon Other stores
Bookmark  Rate:

'Omega Revealed: A Sci-Fi MMF Omegaverse Romance' is tagged as:

The 'Omegas of OAN' series

Recent books by Alexis B. Osborne

All books by Alexis B. Osborne  ❯