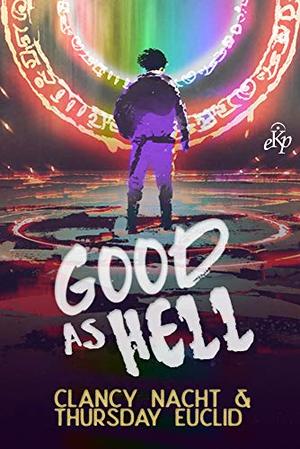 It’s a mysteriously charmed life for orphan Sebastien Harris, but it’s still a shock to be offered a full ride to attend grad school at the obscure but prestigious Bosch University in upstate New York. Trouble starts as he attempts to reach the campus for his interview: first the train is cancelled, then a swarm of migratory air mattresses block the streets.

When he finally arrives, he’s too exhausted to question why a remarkably handsome man named Gem is waiting for him, nor does he have time. A demon horde demolishes the university, and the pair run for their lives—at which point Sebastien realizes Gem is not, strictly speaking, human.

Their adventure exposes Sebastien’s heritage…and reveals the prophecy he is destined to fulfill. Gem is infernal, a human-demon hybrid, and meant to be Sebastien’s servitor, a magical well from which Sebastien, a warlock by birth, will draw the power to remake the world. If he survives.
more
Amazon Other stores
Bookmark  Rate:

'Good as Hell' is tagged as:

Similar books to 'Good as Hell'

Buy 'Good as Hell' from the following stores: