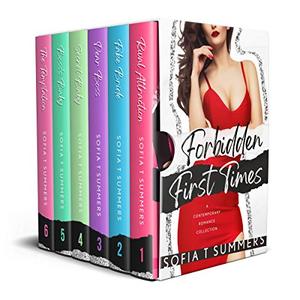 I’m never walking down that path again.
Even if he kisses better than any other man.
We’ll always be bitter rivals.

Chicago’s been great so far.
And what’s been even better?
The billionaire who owns the building.
So, what did I do when he asked me to play his fake wife?
I looked into his gorgeous eyes and nodded my head.

She’s young, innocent and sassy.
And I’m drawn to her like a magnet.
Even though I know what the future holds.
I see scandal as clear as day.
This story could only end in one of two ways.
Heartbreak.
Or an extremely unexpected happily ever after.

We were torn apart for way longer than I’d expected.
Long enough for her to keep a secret from me.
I missed her sweet lips.
Her intoxicating smile.
And I had to have her again.
So I returned, wishing that fate was on my side.
On our side.
And hoping that her little secret doesn’t destroy our second chance.

When I found out that I was pregnant, I didn’t have a choice.
I had to leave – I couldn’t ruin Elliot’s life, not like that.
But now, I have to go back home.
Our daughter is almost four.
And Elliot is no less irresistible than he was five years ago.

She’s tempting, forbidden, everything I shouldn’t crave.
But I still want her.
Her recklessness will get us into trouble.
She’s too young.
And the way I want to touch her will complicate things.

No cliffhanger, no cheating, plenty of steam and guaranteed HEAs included! Contains a preview of "Baby for Brother’s Best Friend".
more
Amazon Other stores
Bookmark  Rate:

'Forbidden First Times: A Contemporary Romance Collection' is tagged as: