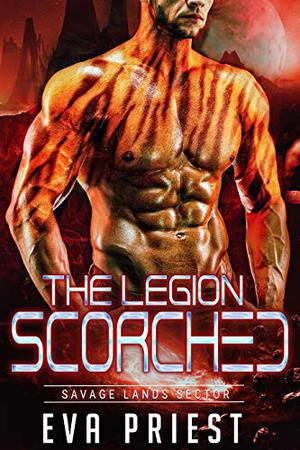 
Legion command has sent me to an outpost slum in the ass end of The Savage Lands. Cloaked operation. Purely recon. Whatever intel they need to find isn't for me to judge. I'm all for finishing my job quickly so I can find a willing female to warm my den.


Should have been simple, until I see my fate-mate being traded for the very thing I'm sent to find.


I stumbled onto my bed after a night of partying, only to wake up in a human menagerie light years away. I'm about to be sold for a briefcase and a taco, when a seven-foot, tiger-striped alien claims I'm his mate, flings me over his shoulder, and runs.


Now I have to figure out a way to evade two alien gangs I somehow insulted, while convincing a beast--and my traitorous body--that I'm not anyone's mate, fated or otherwise.


Scorched is a full-length, stand-alone sci-fi alien romance that is set in The Legion: Savage Lands Sector universe. This series is full of fated mates, instalove, happily-ever-afters, overprotective alien males (that look like aliens!), and the headstrong females that love them.


Each book stands alone, but here is a suggested Reading Order:


Hunted (Part 1 is currently featured in the Stolen and Seduced Anthology; the rest is delivered free via my website).

'Scorched: A Sci-Fi Alien Romance' is tagged as:

Buy 'Scorched: A Sci-Fi Alien Romance' from the following stores: