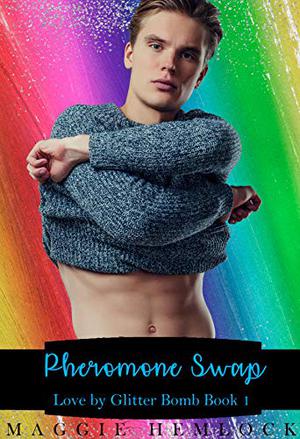 The Love by Glitter Bomb Series is set in the same Hemlock MPREG Universe as the Hemlock Wolf Pack Saga and Hemlock Fairy Tales Series.

Fox shifter, Chase, is an omega married to his job writing for Happy Omega Magazine. He’s happy to provide honest reviews and helpful (sometimes harsh) advice to readers and working with his best friend. He doesn’t have time to slow down and consider what would happen if he had a baby and his life changed forever.

When Chase decides to review a new Alpha/omega hookup app called Pheromone Swap he gets more than another great article out of it. Pheromone Swap’s target audience are omegas in heat. The app prides itself on the ability to enable omegas to find Alphas to meet their primal needs in those wild seasons of life.

Aaron, an Alpha wolf, leaving for Europe soon, stumbles into Chase’s life for a weekend neither of them will ever forget. He leaves a piece of himself behind with Chase. Can the career-driven fox shifter find the work-life balance with a baby on the way and why does Aaron still make up 98% of his daydreams?
more
Amazon Other stores
Bookmark  Rate:

'Pheromone Swap: A Gay MPREG Romance Set in the Hemlock MPREG Universe' is tagged as:

The 'Love by Glitter Bomb' series

All books by Maggie Hemlock  ❯