Confessions of a Dangerous Duke (On His Majesty's Secret Service #3) 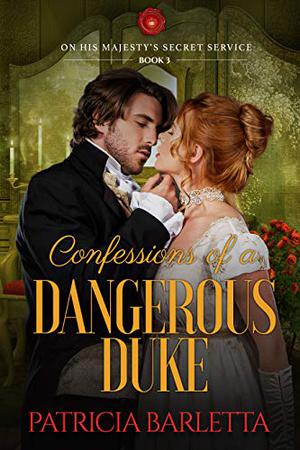 Arianne de Vouvret, the most sought-after modiste in Bath, is hiding a terrible secret. Caught in the clutches of the sadistic Frenchman, Henri Pinard, she must spy for him, as well as be the charming lure in his plot to destroy his enemies. Arianne will do anything to keep her father and her little boy safe, but when she meets the dashing Duke of Lythmore, her past sins clash with his beguiling pursuit. Can she hide her dangerous double life? Or will she be forced to commit her worst deed yet?

Cameron, Duke of Lythmore, an agent for the English government, is an expert at sniffing out secrets and destroying spy rings. But this time, his mission in Bath is personal. He is determined to find the mysterious woman, nick-named Marguerite, who lured his brother to his tragic end. When Cameron meets Arianne, he is immediately drawn to the beautiful modiste. Surely, a woman who creates such charming designs could not be the cruel Circe. Or could she?

But there is one more secret that could destroy them forever.
more
Amazon Other stores
Bookmark  Rate:

'Confessions of a Dangerous Duke' is tagged as:

The 'On His Majesty's Secret Service' series

Similar books to 'Confessions of a Dangerous Duke'

More books like 'Confessions of a Dangerous Duke'   ❯

Buy 'Confessions of a Dangerous Duke' from the following stores: