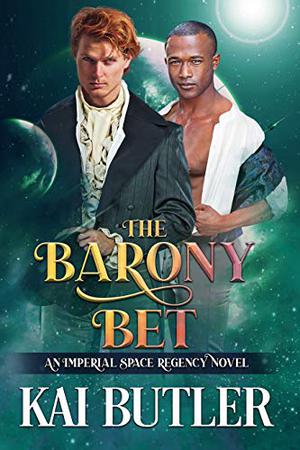 
Lord Deva lives a charmed life. As the son and heir of one of the Empire’s wealthiest lords, Deva’s biggest problem is protecting his younger siblings from their father’s wrath. But when Deva’s actions place him on the verge of disinheritance, his only hope is an insurmountable task.


Dragging his best friend, Asta, into the fray, Deva agrees to revitalize his father’s newest acquisition - a barony on the verge of ruin. Little does he know that undertaking this task will put more than his inheritance on the line, but his heart as well.


Asta is about to depart on a two year deep space trading expedition with one purpose: to fall out of love with his closest friend. Deva has no knowledge of the depths of Asta’s feelings and Asta hopes the distance will allow him to move on from the desire for more than friendship.


Agreeing to one last adventure to help Deva win his impossible task, Asta finds himself thrown into the role of protector and fake fiancé of his best friend. With an estate in ruin at the hands of a corrupt mistress, Asta and Deva must become even closer to win their bet and will place their friendship at risk in the process.


The Barony Bet is a 90,000 word mm regency romance set in space. It is a fake relationship, friends to lovers romance with a HEA.

'The Barony Bet: An Imperial Space Regency Novel' is tagged as:

Buy 'The Barony Bet: An Imperial Space Regency Novel' from the following stores: