Cat’s Got Your Heart 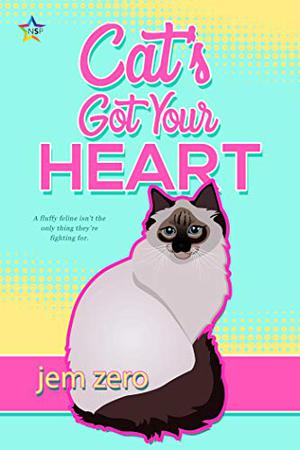 Adopting a cat doesn’t sound hard. Then Jericho Adams meets Harinder Mangal, the surly pet store employee who loves animals and hates customers. Their first encounter inspires more than simple loathing—it puts the ball in motion for an absurd game of deceit that boasts a fluffy cat named Dumpling as the prize.

Harinder hates Jericho’s attitude, especially when it comes to owning a pet. He attempts to chase the other man from his store and is shocked when Jericho overcomes every obstacle, no matter how bizarre. Not only that, but he generates some of his own wild inconveniences that leave Harinder seething in his ugly sweater and mom jeans.

Before either man can get the other to crack, Harinder finds himself unexpectedly homeless. Despite their mutual antagonism, Jericho invites Harinder to crash at his place. The increased proximity makes it difficult for Harinder and Jericho to maintain their respective ruses, not to mention stopping themselves from actually caring about their pet-parenting rival.

CAT’S GOT YOUR HEART is a low-heat 75k word M/M romance between a bi trans man and a cis gay man.
more
Amazon Other stores
Bookmark  Rate:

'Cat’s Got Your Heart' is tagged as:

Similar books to 'Cat’s Got Your Heart'

Buy 'Cat’s Got Your Heart' from the following stores: