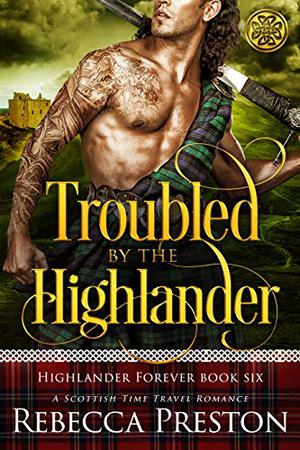 After being brought back in time to 16th century Scotland, Karen must investigate a mysterious epidemic while also exploring her attraction to the irresistible Connor…

Medical doctor and epidemiologist Karen Frakes has found herself in an ironic situation—ill while trying to battle an outbreak of a mysterious disease in Tunisia. She passes out only to wake hundreds of years in the past along the shore of Loch Ness, with the handsome Connor Grant riding toward her in a kilt. While juggling her feelings about her new fate being stuck in another time, Karen is surprised to find herself so attracted to Connor and is also faced with something she is prepared for—an outbreak of cowpox spreading through the Clan.

Connor is a playboy under pressure from his family to settle down, but this member of The Watch is shocked by his immediate attraction to the new woman from the future. Tasked with helping control the epidemic, Connor must work hand in hand with Karen, wrestling an enemy they can’t see.

But when the investigation into the illness leads them down a dark, unexpected path, foes from this world as well as those from the supernatural one will be thrust at them, leaving Karen to fight for her new life and love with Connor while also protecting her heart.

'Troubled By The Highlander: A Scottish Time Travel Romance' is tagged as:

Similar books to 'Troubled By The Highlander: A Scottish Time Travel Romance'

More books like 'Troubled By The Highlander: A Scottish Time Travel Romance'   ❯

All books by Rebecca Preston  ❯

Buy 'Troubled By The Highlander: A Scottish Time Travel Romance' from the following stores: