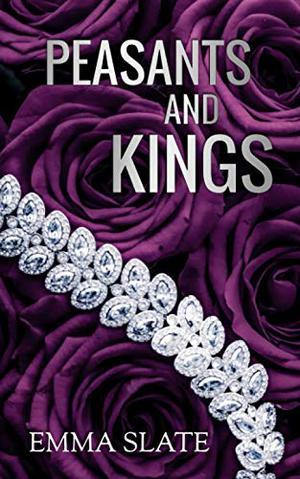 Hadrian’s smile was slow and vicious. “The world is made up of peasants and kings. But I am no king. I’m an emperor.”

I’m being hunted by my family’s enemies.

To disappear, I take on a new identity and enter the opulent and sinful world of The Rex Hotel as Eden Smith.

I’m safe. Until I meet him.

Beautiful, mysterious and brutal—Hadrian is a man who uses his power to shape the world.

He’s a man who will stop at nothing to get what he wants.

And he wants me.

But Eden Smith is an alchemy of lies, a fabrication, a sham.

Bloodlines, alliances, and murderous restitution lie buried deep within my past.

My name is Sterling Miller.

You won’t believe who I am.
more
Amazon Other stores
Bookmark  Rate:

'Peasants and Kings' is tagged as:

Similar books to 'Peasants and Kings'

All books by Emma Slate  ❯

Buy 'Peasants and Kings' from the following stores: