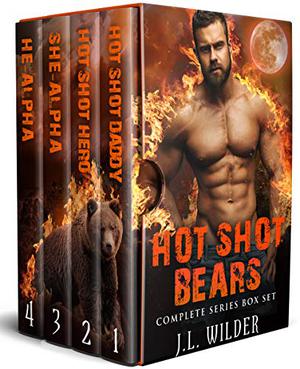 Four burning hot Bear Shifter stories for the price of one in this complete series box set!

The Hot Shot Bears wildland firefighters have three rules:
1. Never let a woman get in the way of firefighting.
2. Avoid any family attachments.
3. You can’t trust a wolf shifter.

…And they’ve managed to break every one of them.

Captain Osha Walker
I'm an itinerant wildland firefighter,
captain of the Hot Shot Bears.
I've never wanted to settle down.
Fire is in my blood.
But when I saw my secret son, my cub...
when I saw Addy again,
nothing could douse the flames.
But can they handle the danger?

Scott Barnes
Our unit needs a new captain,
And it's going to be me.
All I had to do was find the omega,
that belongs to the Hot Shot Wolves.
Except now that I found her and her new baby,
There is no way I’m ever letting them go.
And this runaway omega wolf,
Needs a strong Bear to command her.

Captain Erik String
I swore to myself I would never hire a woman.
But she just might be the best damn firefighter I have ever seen.
And now that the flames are rising,
The Bear in me wants her bad.
As her captain it’s my duty to watch her every move,
And now my attraction towards her can never be extinguished.

All books by J.L. Wilder  ❯