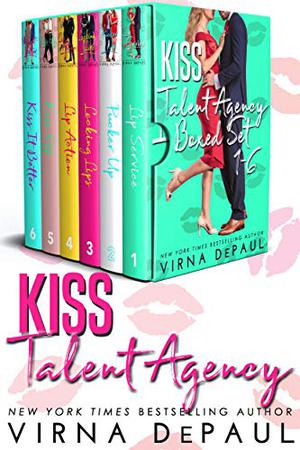 The Kiss Talent Agency romantic comedy series follows the Kiss brothers and their clients as each pursues fame and fortune, only to find a love they never expected.

This electronic boxed set collection includes six full novels—Lip Service, Pucker Up, Locking Lips, Lip Action, Kiss Off, and Kiss It Better—each with a funny, sexy, and emotional romance inside.

Lip Service: Dani gives Hunter Kiss more than Lip Service when she confronts him about trying to bribe her football playing brother. Is it his fault he lost the towel he was wearing when the scuffle began?

Pucker Up: When his best friend accidentally hits publish instead of delete… At first, Lee Bowers wanted to skewer the popular food critic who brutally lampooned his restaurant—apparently while simultaneously ogling his butt. But then he discover that blogger’s identity. He loves Jenna Harrison and he’s going to prove it to her, one anonymous, sexy text message at a time.

Locking Lips: During a chance meeting on an airplane, photographer Caleb comforts a terrified Marissa; he’s more than happy to celebrate their landing in a nearby dressing room but what happens when they discover they must work together despite creative differences?

Lip Action: Marissa needs a boyfriend to get her interfering mother off her back, and British actor Simon, trying to fix his playboy rep and land a juicy role, agrees to play the part.

Kiss Off: Former country sensation Kara is trying to put her celebrity past behind her so she’s traveling the U.S. incognito in her VW van. When a beyond sexy man rolls down a sand dune in a misguided attempt to rescue her, she’s charmed and invites him on a wild road trip. What she doesn’t know is that Declan Kiss is a music agent who knows exactly who she is.

Kiss It Better: Handing out samples at a grocery store isn’t exactly Julia’s dream job, but when a sexy stranger passes out in front of her, she takes care of him until the EMTs whisk him away. Now she has his wallet, she knows where he lives, and she’s found the nude photos of him online...
more
Amazon Other stores
Bookmark  Rate: