Ghost: Retelling the Phantom of the Opera 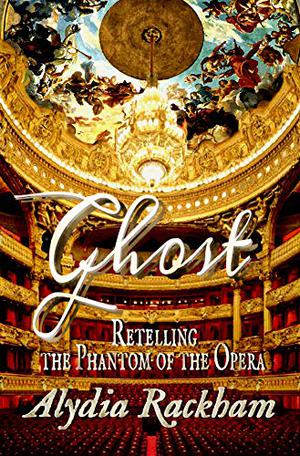 THE WORLD'S MOST HAUNTING LOVE STORY--AS YOU HAVE NEVER EXPERIENCED IT BEFORE...
A cavalier vicomte--the new owner of the theatre--insists on having his own work performed, all the while being haunted by a devilish spirit.
A young soprano's grief for her father's death has robbed her of her ability to sing.
A world-famous tenor has been mysteriously summoned to Paris...
And a shadowy figure lurks through the opera house, torn between his desire for love and beauty, and his need for a terrible revenge.

EXCERPT FROM CHAPTER ELEVEN:
“Mamselle, your hands are like ice,” Mercier whispered. “Please, let me help you.”
“I’m all right, Mercier,” she answered. “I…I need to watch…” She let go of him and pressed herself into the curtain, her attention fixed on the stage. The stagehands were setting it with the dining table of Don Giovanni’s house, laden with wax foods. The lights came on. Musicians, Giovanni, and Leporello entered, and began their banter once more.
The music became uneasy. It stirred and shifted, like a sleeping dragon.
Donna Elvira appeared, making one last plea that Don Giovanni repent from his wicked ways. Giovanni refused, and Elvira turned to flee through the upstage door in tears—
Screamed.
Christine frowned.
Tonight—that scream sounded different.
She strained to see…
Giovanni and Leporello argued about who could be at the door that would scare Elvira so badly.
Dreadful knocks upon the wood. Leporello hid.
Giovanni went to the upstage door himself. Opened it.
The Commendatore stood in the doorway. Stony drapery cascading around him. A sword on his belt. His helmet gleaming in the lights.
Giovanni recoiled.
Mozart’s music gasped—and let out a fatal scream of its own.
A chill raced down Christine’s spine.
Silence.
The Commendatore slowly raised an arm…
But instead of pointing down at Giovanni…
His finger directed the entire opera house to look to Box Five.
“Don Giovanni! You invited me to dinner—and I have come!”
The violins played a sinister pulse beneath the deliberate hammer-fells of that voice—that voice, without guttural resonance or sharp vibrato—only pure, fearsome penetrating tone. An instrument more perfect than mortal hands could contrive. Its power pierced to bone, filling the theatre, shaking the very floorboards.
Rinaldi and Paquet—Giovanni and Leporello—looked stricken to the core. They stumbled, gaped at each other in confusion—but the music went on. So, they had to sing.
And they did sing. As if a spell had been put upon them by that entrancing, terrible voice: they sang as they never had before.
With his outstretched right hand, the Commendatore seemed to twist his fingers around Rinaldi and Paquet’s very souls, rending notes from their bodies like water from rags. But the Commendatore never addressed them, never pulled his dreadful gaze down from that box. And each phrase fell like a clap of thunder down upon the heads of those sitting in it.
“Repent! Change your ways,
For this is your last hour!
Repent, villain!
Repent!
Yes!
Yes!
YES!”
Suddenly, the statue flung its hand in the air, as if about to call down lightning.
“Ah! Your time is finished!”
And in a blaze of flame, and a billow of his cape, he vanished through the
upstage door.
An icy feeling of dread swallowed Christine.
Rinaldi shared her foreboding. He shot anxious looks at Paquet as he continued to sing.

“What strange fear now attacks my soul!
Where do these fires of horror come from?”

The chorus of “demons” now began to lurk onstage, their leering masks twisting and turning as they crept closer, and joined their voices:

“No horror is too awful for you!
There is far worse in store!”

CRACK!
BOOM.
Christine’s head jerked up.
A blinding flash overtook the ceiling.
A cloud of dust exploded around the chandelier.
more
Amazon Other stores
Bookmark  Rate:

'Ghost: Retelling the Phantom of the Opera' is tagged as:

Similar books to 'Ghost: Retelling the Phantom of the Opera'

More books like 'Ghost: Retelling the Phantom of the Opera'   ❯

Buy 'Ghost: Retelling the Phantom of the Opera' from the following stores: