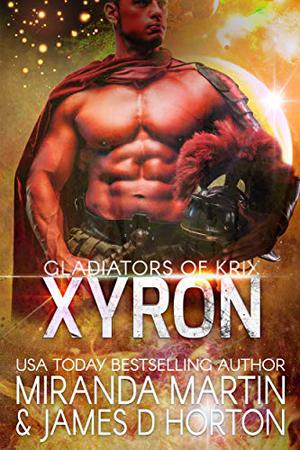 The generational ship is humanity's hope for a future. Travelling to a destination Cora never plans to see, but maybe her grandchildren will. Those dreams are dashed when the ship is attacked by space pirates. She and a handful of other women end up on the Gladiatorial Planet of Krix and sold into slavery.

Cora is the weird girl. The last picked. The unpopular one. When one of the gladiatorial warriors says she’s his, she thinks it’s the same old game. One she’s fallen for before. But she’s going to find out there’s nothing this red-skinned, powerfully built alien competitor won’t do to win her heart.

The moment I see her I feel it. The Xi.

I didn’t believe it was real. A fable among my people, a legend. Xi, when a man finds his Xi, his fate is called. It is the secret gift of the Grey Widow, the Crone's blessing.

There is no doubting it. My Cora is the softest, curviest and lushest of the new females called humans. I must hold her beautiful body in my arms. Show her the pleasures of being my mate. But we are slaves and our lives are not our own.

Spinning off from best-selling series the Red Planet Dragons of Tajss comes a new set of books, the Gladiators of Krix. From USA Today Bestselling Author Miranda Martin and her soulmate James D Horton, Xyron is a full length, standalone SFR novel with a happily ever after ending, plenty of steam, thrilling arena competitions and house politics.
more
Amazon Other stores
Bookmark  Rate:

'Xyron: A SciFi Alien Romance' is tagged as:

The 'Gladiators of Krix' series

All books by Miranda Martin  ❯

Buy 'Xyron: A SciFi Alien Romance' from the following stores: