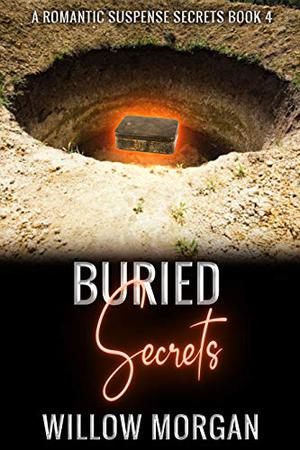 Buried Secrets is the sizzling fourth book of the Secrets series!

It was supposed to be a simple home remodel, but it ended up turning their lives upside down.

Freya has felt like she is barely hanging on by a thread since her husband died. Now, years later, she finds herself still flipping houses for a living with her deceased husband’s friend, Jessup. Trying to bring a little light to her life, Freya enlists Jessup's help to renovate the house she shares with her grandparents.

But things get more than a little messy when they find an old metal long box buried underneath a fountain in the back yard. When she opens the box she discovers a secret that challenges everything she’s ever known.

What will she find when Freya goes on a trip to uncover the truth everyone has been hiding from her for years?

Jessup knows he shouldn’t have feelings for his dead friend’s wife. But, no matter how many times he’s tried to suppress them, his feelings continue growing stronger. When Jessup agrees to help Freya learn the truth of the secrets in the metal box, he soon realises he may be in over his head.

Will Jessup be able endure the roller coaster ride of discovery that puts their very lives on the line without blurring the lines of friendship? Or will coming close to loosing their lives be the very thing that solidifies Jessup and Freya’s feelings in a new and exciting way?

As tensions mount, bullets fly, and the buried secrets of the past come alive in hazardous ways, will Freya and Jessup live to see a possibility of more in their friendship? Or will they end up six feet under themselves?

'Buried Secrets' is tagged as:

All books by Willow Morgan  ❯