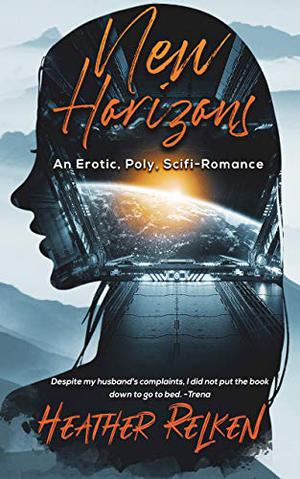 Top on the list of "things I didn't expect to happen this weekend" is: -- Surprise sex with an alien-cyborg commander, which means I'm now the lady-mate in a weird marriage triangle with him and his legionnaire --Though being taken to, and promptly busted out of, Area 51 by the aforementioned aliens is definitely a close second.I also didn't really bargain for how much I'd fall for these two extraterrestrial men. There are more than a few on this rig who find our relationship a violation of nature, though. Unfortunately they don't seem content to just judge us silently from afar. No, these Turukai are more than willing to voice their disagreements. And when they threaten not just my happy little threesome, but all of humanity as well?I might be forced to make one hell of a drastic decision.

~*~ READER DISCRETION ADVISED: DUBCON & EXPLICIT CONTENT ~*~
--This novel contains a scene of dubcon ("dubious consent", as described by medium.com as "[indicating] that consent is unknown or uncertain, and this is distinguished from consent being definitely absent. Often, a character involved is uncertain about whether he or she wants to participate.”). Directly after this scene, participants discuss what happened and what cultural misunderstandings led to the situation.

--This novel also contains frequent, explicit sexual content with non-humans. If this type of content is what you're here for, you'll have a great time! If not, you may want to try a sample first.

Please take care of yourself! You know what is best for your own well-being and I do not in any way want you to risk your comfort <3

*~*~* PRAISE FOR NEW HORIZONS *~*~*
"I really adored this book; it was well written, engrossing, and dynamic. The characters were unique and distinct. The storyline was like nothing else I’ve ever read before and the sex scenes were creative and unique!" -Trena

"This story was so fun to read and the characters were amazing. Marine is great and I love how he changes from this character that immediately sets you on edge to this protective, sexy man who just dotes on his woman. His arc is by far my favorite. They all compliment each other and it works really well." -Brittney

"If Marine dies, I riot." -Brittney

"The action scenes were written well and pulled me in, I couldn’t stop reading! Lila's narration definitely has a unique style-- I feel like I’m trapped in a tiny storm that is her stream of consciousness! It makes her read as very genuine and more developed as a character." -- Elizabeth

"It’s always telling to me, if the book stays in my head days after I’ve read it (and even after I’ve started a new book), so you clearly have a really solid story build here. " - Gabrielle

"I actually had to stop reading because I became too emotional toward the end when things started to get dark for Marine. I’ve fallen for the big lug and think their Trio is so wonderful together." -Gabrielle
more
Amazon Other stores
Bookmark  Rate: