The Redemption of a Rogue (The Duke's By-Blows #4) 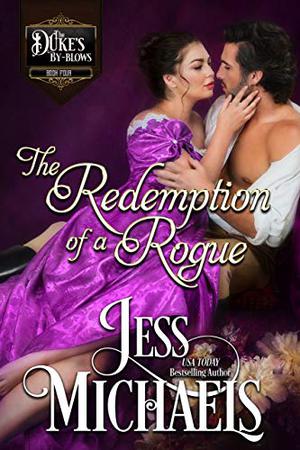 Imogen Huxley was already questioning her decision to seek out a lover at a notorious brothel, but never more so than after she witnesses a murder! She flees for her life and runs right into the arms of Oscar Fitzhugh, a mysterious club owner. She has no choice but to take his offer of protection while he tries to save her life. The passion that comes with that protection is just a bonus.

Oscar Fitzhugh was at the brothel investigating the death of his former mistress. He’s one of the infamous by-blows of the Duke of Roseford, but he cut himself off from that life long ago. Now he lives his life, trying desperately to keep everyone around him at arm’s length. But Imogen is too intriguing not to protect and seduce.

Danger is at every turn, pleasure in each touch. But as they circle ever closer to a future that could be everything they’ve ever needed, the murderer looking for Imogen is also coming nearer. If he finds them, all will be lost.

This book is part of the Duke’s By-Blows series but can be read as a stand-alone novel.
more
Amazon Other stores
Bookmark  Rate:

'The Redemption of a Rogue' is tagged as:

The 'The Duke's By-Blows' series

Similar books to 'The Redemption of a Rogue'

More books like 'The Redemption of a Rogue'   ❯

All books by Jess Michaels  ❯

Buy 'The Redemption of a Rogue' from the following stores: