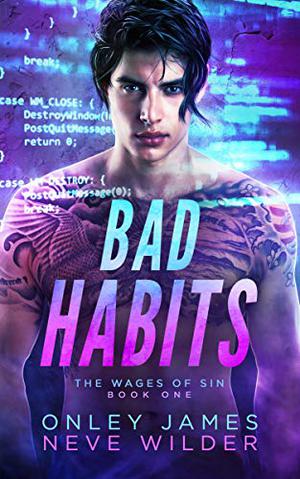 Smart-mouthed hacker Caspian escaped an abusive home at 16. Now he’s one of the most sought-after black hat hackers in the world.

Jonah is a ruthless contract killer with only one weakness, the vibrant runaway he took in years ago: Caspian.

But Cas bailed when he turned 18 and Jonah has maintained a steady diet of eat, kill, sleep since then.

Jonah had always been the fatal flaw in Cas’s code, the bug that froze the part of his brain separating logic from emotion.

A threat to Cas’s life brings him back years later—not as the boy Jonah remembers, but as a hardened computer hacker with a price on his head and a list of names everybody wants.

The chemistry between them is as undeniable as it is dangerous.

In a world of secrets and murder, trust is a liability and feelings can get you killed. But Jonah let Cas go once, and he’s not willing to do it again. Even if it means confronting his past, solving a twisted puzzle, and taking out half of New York city’s seedy underbelly to keep Cas safe.

Bad Habits is a steamy, action-packed thrill ride of a romance with a HEA and no cliffhangers. It features morally ambiguous men, dirty, dirty lovin’, pancakes drizzled with snark, chosen family, drive-in movies, and the kind of love that drives a guy to murder in order to protect. In short: all the emo, heat, and sarcasm you'd probably expect from an Onley/Neve collab. This is book 1 in the Wages of Sin series. Each book will follow a new couple.
more
Amazon Other stores
Bookmark  Rate:

'Bad Habits' is tagged as:

The 'Wages of Sin' series

All books by Onley James  ❯