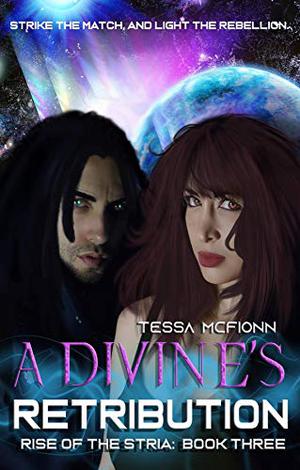 Strike the match... and ignite the rebellion.


Standing in front of her brownstone in Boston was the last place Evainne Wagner thought she would ever find herself. Not after she and her soulbond match, Stria Captain Kahlym cal Jhuen, had faced the impossible odds in so many challenges together, the last of which including running from the latest snare of the Thrall Emperor. Determined to return to him, she recruits the aid of her mysterious mentor to return to the Seventh Quadrant and to the man who betrayed her trust.


Desperation and terror had forced Kahlym to send his love far away from the clutches of approaching enemy. Lashing out in heartbreak and anger, Kahlym had never expected to see his Divine so soon, much less in the company of his long-lost brother. But it seemed fate and prophecy had other plans. To repair the rift between them, he must find the courage within him to trust in her as they scour the galaxy for strong allies and as the price on his head grows.


However, the Thrall Emperor Gha'jahn M'Uubair is not willing to part with Evainne without a fight. Calling on his assassins and the remaining Divines still under his thumb, he vows to reclaim his missing prize, no matter the cost.


Surrounded by the only family she knows, Evainne once again finds herself entangled in a web of legends and treachery, revealing new gifts and ancient hatreds. As dark forces threaten to tear her world apart, she must risk it all or lose any chance for the future.
more
Amazon Other stores
Bookmark  Rate:

'A Divine's Retribution' is tagged as:

Similar books to 'A Divine's Retribution'

Buy 'A Divine's Retribution' from the following stores: