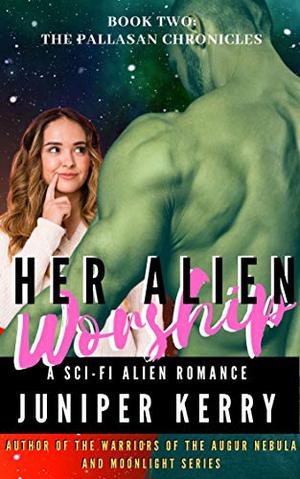 Rosalie isn’t really a heroine. She isn’t brave like Freddie, or smart like Julia, or badass like Nia. She’s just… Rosalie: a too-curvy girl with a hopeless desire to be loved. She had hoped that when she volunteered to come to Beshtast, she would find a place of her own, but all of her friends pair-bonded with Xalke warriors around her, leaving her just as alone as before.

Still, when she decided to come to the Pallasan Trading Post, she had no idea she would meet anyone like Sebarriel. His stormy demeanor and strange perspective on the universe leave her speechless... And his interest in her pleasure is too tempting to resist. But with anti-human rhetoric in the air, and Sebarriel’s right-hand man continuing to promote it, can she really respect herself if she stays with this brash, raw alpha alien? Rosalie will have to make a choice between the affection she craves and her loyalty to her species… and she really isn’t sure which one to pick.

Sebarriel hasn’t been able to connect with the Goddess since he and Reger fled Beshtast. At first, he assumes it is punishment for letting Reger take the lead in getting rid of the humans. But then he meets Rosalie;. She is gorgeous and kind, thoughtful and smart. And her curves are far too luscious to resist. When he is with her, he starts to feel the world opening up again. But as Reger reminds him every day, Rosalie is human. Using her to connect with the Goddess is one thing; feeling affection for her is quite another.

This is the second book in the Pallasan Chronicles by Juniper Kerry. It features a guaranteed happily ever after, action, adventure, suspense, and danger. There is a strong pair-bonding between an alien alpha male and a human heroine, along with steamy sex scenes.
more
Amazon Other stores
Bookmark  Rate:

'Her Alien Worship: A Sci-Fi Alien Romance' is tagged as:

Similar books to 'Her Alien Worship: A Sci-Fi Alien Romance'

All books by Juniper Kerry  ❯

Buy 'Her Alien Worship: A Sci-Fi Alien Romance' from the following stores: