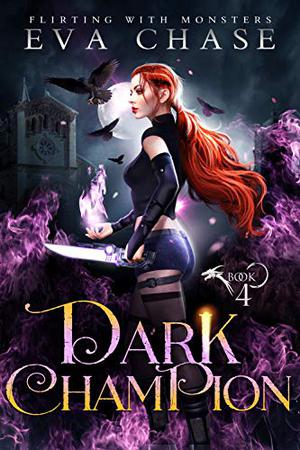 When life hands you demons, it’s time to make a little destruction.

I thought I wanted to know what I was. Now that I’ve discovered the answers aren’t so pretty, it turns out there are no take-backs.

The most powerful monsters in existence fear this one mortal thief. Unfortunately, that means they’re set on stamping out my existence. The demon who was my strongest ally has been caught in the middle, his freedom and his life on the line.

And that’s before we get into the genocidal psycho who’s about to unleash a catastrophe that could destroy both our worlds all by itself.

I have my work cut out for me, even with my monstrous lovers by my side. Can I become the champion of my darkness, or will it consume me instead?

Either way, it’s going to be one hell of a ride.

*Dark Champion is the fourth and final book in the Flirting with Monsters series. If you love kickass heroines with sass to spare, drool-worthy monsters who have their own sense of morality, and steamy romances where there'll be no choosing required, dive in now!*
more
Amazon Other stores
Bookmark  Rate:

'Dark Champion' is tagged as:

The 'Flirting with Monsters' series