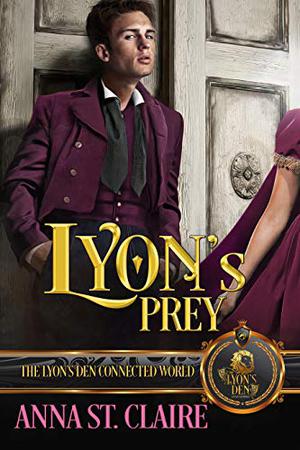 Enter the world of the most notorious gambling den in London, where matches are made... unusually. Welcome to the world of THE LYON'S DEN: The Black Widow of Whitehall Connected World, where the underground of Regency London thrives... and loves.

Haunted by his wife’s death, he vowed to never marry again...until he meets her!

Evan Prescott, the fifth Earl of Clarendon lost his wife during the birth of their child. Broken, Evan seeks solace in the Lyon’s Den, a world of drink, cards, and excess—where wins and losses are easier to navigate than responsibilities. Overconfident and in his cups, he makes a bet that will change his life.

Still mourning the loss of her father and elder brother…

Lady Charlotte Grisham saves her young brother from the path of a speeding carriage. In a fit of pique, she throws propriety to the wind and storms up the steps of the owner’s London townhouse—and meets the man that upends her world.

The stars align when his high stakes bet and her lapse in judgement give the Black Widow of Whitehall the perfect opportunity to spin her web of hearts, while untold danger lurks a step behind.

Can a marriage of convenience give rise to love in time to avoid deadly disaster?

(Note: This is an introductory novella to the Rakes of Mayhem Series - The Earl of Excess, Book One, coming soon!)
more
Amazon Other stores
Bookmark  Rate:

The 'Rakes of Mayhem' series

Buy 'Lyon's Prey: The Lyon's Den' from the following stores: