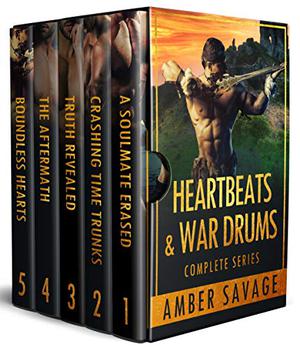 Rylen Hagan has everything he ever wanted; on the cusp of winning the Nobel Prize for Physics, the love of the woman of his dreams and a thrilling career as a Time Pilot. But in the blink of an eye he loses it all when Clarissa is snatched from him and simply erased from time.

Undaunted by the difficulties and ignoring the risks, he sets off to find her again, but is transported straight into the middle of war that is raging through the Scottish Highlands, a thousand years out of his comfort zone. As his quest drags him from the misty mountains of Scotland to the shores of the New World, Rylen notices that a rip in time threatens to destroy everything he has ever known.

As he slowly begins to fall for Bronia, the feisty daughter of the clan chief Magnahul, Rylen finds himself in danger of forgetting the real reason he is a millennia away from his time. With changes in the past now affecting the future, his desperate actions are beginning to reap what they have sown and as clans march to war there will be a heavy price to be paid.

But there is something else that is at play with the fabric of time and it is altering everything that Rylen knows, slowly and inexorably destroying his past as sure as it is destroying the future of the clans he has come to know as friends.

Is there anything he can do to change the outcome? Or has his actions started a chain reaction that will consume millions of lives?

All books by Amber Savage  ❯