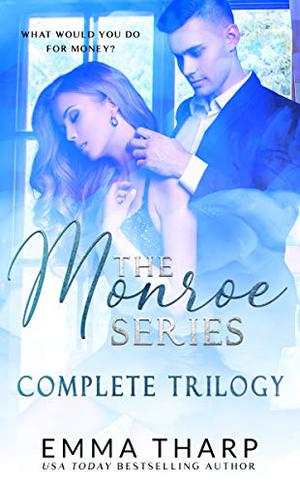 What would you do for money?

Camille Lewis is desperate. She needs surgery and doesn’t even have enough money in her bank account to cover car repairs, much less a mountain of medical bills.

Garrett Monroe is Camille’s boss. A shrewd businessman. A billionaire who’s just signed his divorce papers. His brother thinks he needs to get his groove back by sleeping with a woman.

When Garrett finds out about Camille’s problem, he offers her the unthinkable. One hundred thousand dollars in exchange for a weekend alone together.

Could Camille do it? Trade her body for money? She’s attracted to him, and it’d only be meaningless sex. It’ll also solve all of her problems. Or will it create more?

Donovan Monroe is successful, handsome, and single, and he intends on keeping it that way. There’s only been one woman in his life who wouldn’t give him the time of day—and even now, it still bothers him.

Liza Dooley was the most popular girl in high school. She’s beautiful, with a magnetic personality. Now, fifteen years later, she needs Donovan more than ever.

When Liza’s loan application crosses Donovan’s desk, he sees it as a way to finally prove to Liza what she missed out on all those years ago. And when they come face-to-face, he knows what he has to do…make her fall for him, not because he wants a relationship. No, he wants revenge.

This should be easy, and maybe he’ll have fun in the process. Getting involved with Liza again brings back all the feelings he had for her in high school, except now, she’s reciprocating them. But he knows what he’s doing is all in good fun… Or is it?

She’s a workaholic who’s too busy to worry about relationships. He’s an adventure seeker who can’t seem to ever find the right woman. That’s why their one week per year vacation arrangement works out so well for them.

Three years.
For three solid years, they had been meeting up for one glorious week.
The rules were simple:
They had seven days to love with abandon.
Seven days to live without regret.
Six nights to spend together.
Only now, someone wants to change the rules.
And someone wants to see where this could go.
Neither one of them wants to lose what is between them.
more
Amazon Other stores
Bookmark  Rate:

'The Monroe Series Complete Trilogy' is tagged as:

All books by Emma Tharp  ❯

Buy 'The Monroe Series Complete Trilogy' from the following stores: