Finn's Plan - Book One: Find Her 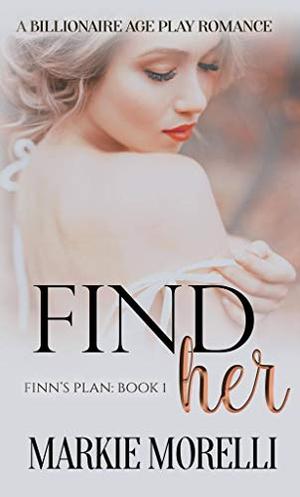 “You can’t buy me, Finn,” she replied. “Money doesn’t mean that much to me. I’ll admit I’m attracted to you, but don’t try to ‘make me’ do anything. I may be small and easy to get along with, but I can be feisty as well. And stubborn,” she added, thoughtfully.
“I’m counting on that,” he answered cryptically.

Billionaire Finley Tremont is a man of action and he has plans, big plans for his new bride, Trisha. He wants more than a traditional marriage, much more. Putting on the brakes will be difficult for him, but that’s exactly what he needs to do. Each step must by measured, designed to make her crave the same things he does. He adores her, aches for her, and now that she’s agreed to become his wife, Finn intends to take Trisha into a world he’s only dreamed about.
As a brilliant CEO, Finn is used to overcoming obstacles to get what he wants, and he wants to be her husband and daddy. Let her be naughty and rebellious if she wants to; he hungers for the challenge and a chance to prove that he is more than master enough. In the end, he's going to win her undying love.
more
Amazon Other stores
Bookmark  Rate:

Similar books to 'Finn's Plan - Book One: Find Her'

Buy 'Finn's Plan - Book One: Find Her' from the following stores: