A Woman's Worth (Spawn of Darkness #4) 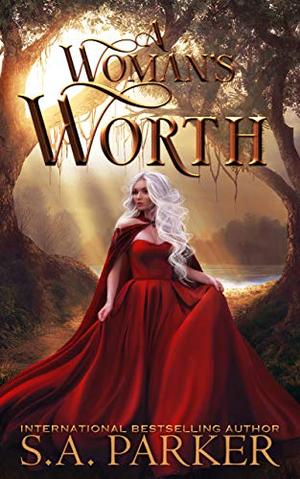 This isn’t the first time Dell’s crawled out of a nightmare—though she’s not the same woman who once stood on the edge of a cliff, ready to throw it all away.

Armed with a power she has no idea how to control, Dell’s desperate to find a way back to her Sun Gods. But something else is hunting the four possessive Fae who fought their way into her fractured heart ...

A monster is lurking—a beast far more ruthless than the one stalking beneath her own skin—and one wrong move could cost Dell everything she never knew she wanted.

The darkness is a greedy thing, and this has never been a fairytale ...

Hold onto your heartstrings for this epic-sized conclusion to Dell’s story. It features a strong—albeit mentally shattered—female lead, and four High Fae Gods who will do everything in their power to protect her.
This story, unlike the first three, is written in mixed POV.
It contains sensitive and taboo subjects, explicit sexual content, offensive language, violence, and other content which some readers will find triggering. Intended for a mature audience aged eighteen years and over.
more
Amazon Other stores
Bookmark  Rate:

'A Woman's Worth' is tagged as:

The 'Spawn of Darkness' series

Similar books to 'A Woman's Worth'

All books by S.A. Parker  ❯

Buy 'A Woman's Worth' from the following stores: