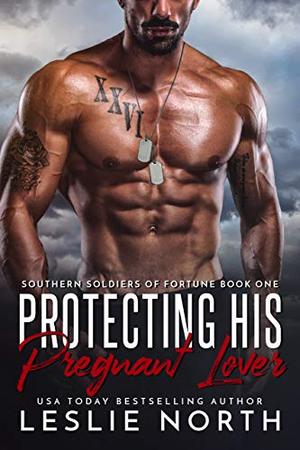 Self-proclaimed nerd Olive Owen can’t believe it when Levon Asher, sexy, nothing-but-muscle Navy SEAL admits to having had a crush on her in high school. She hasn’t seen him in ten years, and reconnecting with him at their high school reunion is a bit of a surprise. A bigger surprise is that after one night of passionate love-making, Olive is pregnant, and Levon has long since left town on a final SEAL mission. When he returns seven months later, he’s a member of the private security group Southern Soldiers of Fortune, who are in town for a joint operation with the local police to stop a gang from infiltrating the school where Olive works. When Olive accidentally stumbles onto a gang meeting, the threats on her doorstep leave no doubt—she’s being targeted. And when she agrees to move in with Levon for her own safety, it soon becomes clear her heart is in danger too.

Knowing Olive’s at risk is driving Levon crazy. He realizes he’s being overbearing, but he just can’t stop himself. The thought of anything happening to her or his unborn child is enough to make him more than a little controlling. But what’s safer—keeping her close, where he can protect her, or pushing her back, out of harm’s way? He needs Olive to be okay, but his impulses are giving him mixed signals even as the clock starts counting down to a confrontation with the gang. A shocking reveal of a gang member’s identity could drive Olive away from Levon for good, leaving him wondering if solving the crime will come too late to resolve the mystery that matters most to him—how to hold on to Olive’s heart.

USA Today Bestseller Leslie North invites you to indulge in a heart-pounding military romance with a hot, super-alpha Navy SEAL protecting the woman he loves at all costs...
more
Amazon Other stores
Bookmark  Rate:

'Protecting His Pregnant Lover' is tagged as:

The 'Southern Soldiers of Fortune' series

Buy 'Protecting His Pregnant Lover' from the following stores: