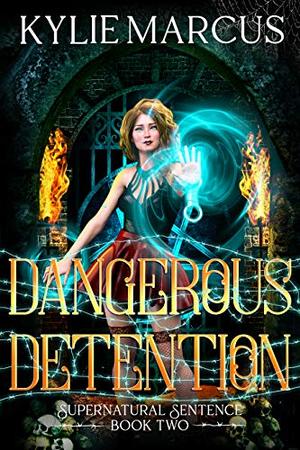 Her cover has been blown, but that’s the worst of Celestia’s problems. Exposed secrets have proven Astoria was murdered, but the case is not as cut-and-dry as she thought it would be.

Her parents financed a secret research lab under the prison over three hundred years ago. Seems crazy, but so does everything that Celestia has uncovered in the short time she’s spent as a prisoner in Vamereitch Correctional Center.

Now relying on the help of the three, undeniably hot, vampire princes, Celestia plans to take up her sister’s mantle and expose the experiment before anyone else is hurt, or worse, killed. But just when they think they have a safe plan, Kingston’s spiteful uncles disrupt their plans and Celestia finds herself an uninvited witch prisoner in the infamous Bludhausen, a prison for vampires with a bloodlust.

Getting out is going to be hard, but staying alive is even harder. Especially when she has to trust King, the last vampire in the world she wants to be stuck in a cell with.

Continue the Supernatural Sentence series today, scroll up and one click!

'Dangerous Detention: A Paranormal Prison Romance' is tagged as:

All books by Kylie Marcus  ❯