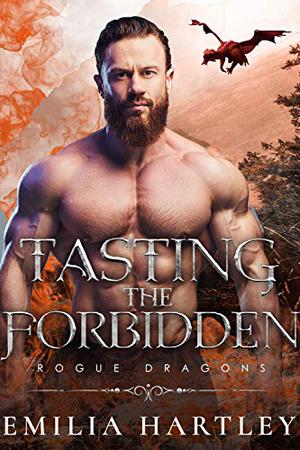 Her mom always told her that dragon shifters would burn her to death for her magic, and now the local dragon-clan leader is hunting her down.

Nellie loves her small town, but ever since a rag-tag bunch of dragon shifters moved in and snapped up her friends as mates, she’s considered leaving. Even being in the presence of a dragon shifter can send her into a panic attack. That’s a problem since her best friend and coworker, Evangeline, has changed into one. To make matters worse, Evangeline is pushing Nellie to let her guard down around the hot but scary clan leader, Gavin. Never. Going. To. Happen.

The trouble is, Gavin won’t stop looking for her, and Nellie has used up nearly all her magic trying to avoid him.

Gavin Masters knows he’s a monster, but that doesn’t stop him wishing Nellie would keep even one of the gifts he’s sent her. He can’t stop thinking about her sassy wit, her soft curves, and her silky hair. His obsession with her has almost completely driven out the wild pain he felt when the woman he thought was his mate left him, claiming to be afraid of him. Unfortunately, Nellie is afraid of him, too—with good reason, he learns. Many of her ancestors have been burned to death by dragons. Gavin would never let anyone do that to Nellie, but he understands why she could never trust him.

Too bad he can’t convince his beast—or his heart—that pursuing her is a lost cause.

The last book in the Rogue Dragons series, Tasting the Forbidden is a steamy romance with great action and a satisfying happily-ever-after that makes it a great read either on its own or with the other books in the series. This latest from Emilia Hartley, is best for adult readers.
more
Amazon Other stores
Bookmark  Rate:

'Tasting the Forbidden' is tagged as:

Similar books to 'Tasting the Forbidden'

Buy 'Tasting the Forbidden' from the following stores: