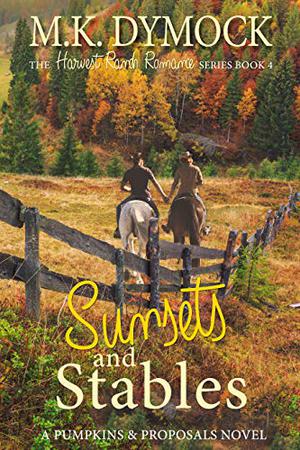 Mirabelle brings romance alive every Harvest Festival for her guests, but she is bent on staying single. Will she fall in love before the last leaf falls?

After breaking up with a jerk of a fiancé, Mirabelle Mason used her life savings and then some to follow her dream hosting horseback rides in the mountains. When a social media influencer chooses her stable as a backdrop for a “surprise” marriage proposal, she’s destined to go viral.

All is likes and love until the half-million-dollar engagement ring goes missing. If Mirabelle doesn’t find the diamond in a week, the influencer will destroy her reputation, and she’ll go viral for all the wrong reasons.

Having been forced to retire from the FBI for going after the wrong billionaire, Danny Cabrera is biding his time as a small-time, small-town security guard. He needs to focus on getting his career back in New York, not on helping the chaotic woman covered in horse manure find a trinket in the wilderness. Except he’s got a knack for getting to the truth and he still likes saving the day.

Determined not to make the same mistake twice, Mirabelle has sworn off men. Only the clock is ticking, and she finds herself needing Danny—and even more worrisome, wanting him. Can she find the ring and love without losing herself?
more
Amazon Other stores
Bookmark  Rate:

'Sunsets and Stables: A Pumpkins and Proposals Novel' is tagged as:

Similar books to 'Sunsets and Stables: A Pumpkins and Proposals Novel'

More books like 'Sunsets and Stables: A Pumpkins and Proposals Novel'   ❯

All books by M.K. Dymock  ❯

Buy 'Sunsets and Stables: A Pumpkins and Proposals Novel' from the following stores: