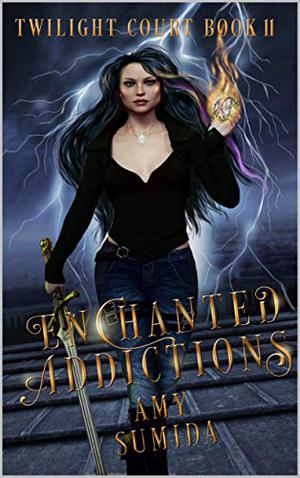 This addiction is magical.

Queen Seren Firethorn is once again Ambassador Sloan, working for the Human Council, and she has just received her second assignment. Seren and two of her husbands are sent to investigate the suspicious deaths of humans in Kansas City. The humans appear to have died from a drug overdose but it was no ordinary drug that killed them. This drug was made with magic—fairy magic.

Seren's investigation draws her into a web of complicated lies and beautiful glamours so tangled that the truth seems impossible to unravel. As the body count rises, Ambassador Sloan scrambles to find the mastermind behind the magic drugs but this may be one enchantment that even the Twilight Princess is unable to resist.

4. Here There be Dragons


And check out Amy's other series:

The Godhunter Series: Vervain is a witch who joins of group of rebel gods to fight for humanity. Join her as she crosses the realms, fights epic battles, and falls in love with divine men. This is a slow-building reverse harem series with lots of humor, sex, and magic.

The Spectra Series: is the first of its kind—a Reverse Harem Superhero Romance packed full of adventure, intrigue, aliens, mutants, shapeshifters, and, of course, romance. Sexy, thrilling, and out of this world, this is the series that started the Superhero RH genre.

The Spellsinger Series: Elaria Tanager is a spellsinger, a rare supernatural who can change music into magic. She begins her adventures as a fixer, a sort of magical mercenary, but quickly becomes much more.

'Enchanted Addictions: A Reverse Harem Fairy Romance' is tagged as:

All books by Amy Sumida  ❯