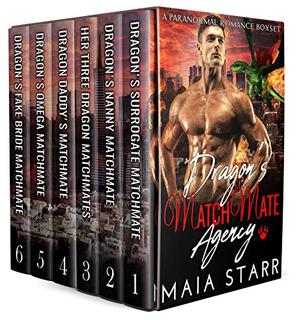 These six steamy stories feature powerful dragons and their human mates. These dragons are obsessed, possessive, and will stop at nothing to protect their women.

As a dragon shifter, the only thing missing from my life was a baby.
So I had the Hybrid Baby Hearts service pair me with a surrogate.
Lily Bradford was my fated mate.
An innocent angel that I craved.
One that I needed to shield from her stalker.
The enemy was a wolf shifter.
The only thing standing between me and my family.

My human nanny doesn’t know what she’s getting herself into.
I’m a powerful dragon shifter, and my life is full of danger.
I’ve got my enemies hunting me down.
They’ll stop at nothing to destroy me.
Naomi isn’t safe either.
I have to protect her, and then find out what she’s been hiding.

Three able dragon shifters are protecting me from my bear shifter ex boyfriend.
They’re not just guarding my body, but they also have a chance at finding love.
Picking one of them is hard.
I want all three.
But they’re possessive and jealous of each other.
They need to find a way to share me… and our baby.

Arthur left me with a secret just months after I met him.
He wasn’t ready to give me his heart.
So I could never tell him I was pregnant.
I never even thought I’d see him again.
But the Fiery Hearts Dating App set us up.
That’s when I knew that trouble was right around the corner.

I helped Catarina escape the Omega Hearts Agency.
And then I fell for her.
She’s forbidden and tempting.
And has a terrible secret that could end her life.
But I always protect what’s mine.

Amelia is my mate and I’m keeping a secret from her.
A dating agency matched us.
She’s supposed to be my fake bride.
But I love her for real.
What she doesn’t know is that I need her to give me a baby or I lose my inheritance.
Will she think that that’s the only reason I wanted her in the first place?

'Dragon's MatchMate Agency: A Paranormal Romance Boxset' is tagged as: