The Duke Takes a Bride (The Rocking Royal Trilogy #2) 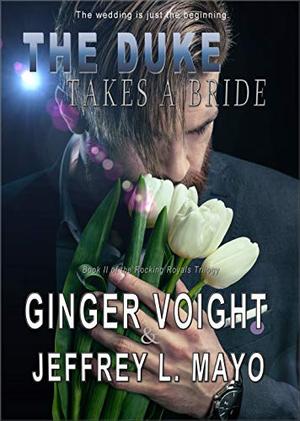 Peaches McPhee had no idea how much her life would change when she was hired to write the tell-all memoir for The Duke of Mayhem, a royal who went rogue to become a major rock star. But never in her wildest dreams had she expected that in eight short months she'd become his bride, pregnant with the next heir to the House of Quinn.

It was every fairy tale come true, but a nightmare looms over their happily ever after. Peaches and Auggie have made some powerful enemies along the way, not the least of which is Christopher Tyler - her former colleague and someone who had betrayed her trust in one of the worst ways possible. His hatred of her burns as bright as ever. He cannot wait to snatch away her happy ending, or anything else that might mean anything to her.

Things only get worse when he joins forces with Cillian Byrne, who has an entire kingdom to gain if he can drive Auggie once again from Aldayne.

Will Peaches find the strength and determination to redeem the House of Quinn and get Auggie to the throne… or will she finally bring about its ruin?

In Book II, Ginger and Jeff take you further into Aldayne and the life of our rocking royals, who try to preserve love and family despite all odds.
more
Amazon Other stores
Bookmark  Rate:

'The Duke Takes a Bride' is tagged as:

The 'The Rocking Royal Trilogy' series

Similar books to 'The Duke Takes a Bride'

More books like 'The Duke Takes a Bride'   ❯

Buy 'The Duke Takes a Bride' from the following stores: