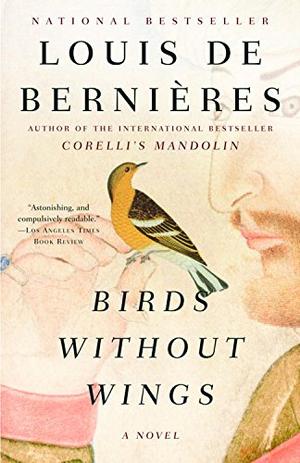 In his first novel since Corelli’s Mandolin, Louis de Bernières creates a world, populates it with characters as real as our best friends, and launches it into the maelstrom of twentieth-century history. The setting is a small village in southwestern Anatolia in the waning years of the Ottoman Empire. Everyone there speaks Turkish, though they write it in Greek letters. It’s a place that has room for a professional blasphemer; where a brokenhearted aga finds solace in the arms of a Circassian courtesan who isn’t Circassian at all; where a beautiful Christian girl named Philothei is engaged to a Muslim boy named Ibrahim. But all of this will change when Turkey enters the modern world. Epic in sweep, intoxicating in its sensual detail, Birds Without Wings is an enchantment.
more
Amazon Other stores
Bookmark  Rate:

'Birds Without Wings' is tagged as:

Similar books to 'Birds Without Wings'

Buy 'Birds Without Wings' from the following stores: