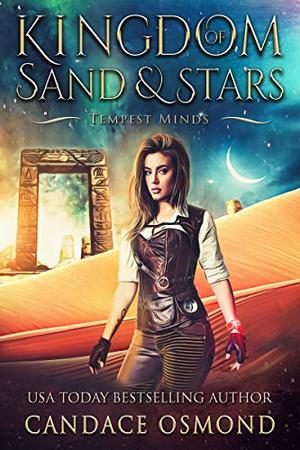 The mind is a wondrous beast, even for the Gods.

After risking her life to save the man she loves, Andie Godfrey is kidnapped by the same man who’d held him prisoner. His brother, Horus. The God of Vengeance holds the people of Egypt under his thumb, and Andie in a cage. He wants inside her mind, to discover the secrets she holds about Silas and the portal the Star People protect.

But he can’t get in, can’t access her thoughts or memories, and the mentally unstable god grows more impatient by the minute. Just when she thinks all hope of escape is lost, Silas foolishly trades himself to save her. But his plan backfires and Andie discovers Horus’ elaborate plot to frame his brother for murder.

Anarchy ensues as Andie and Silas barely escape with their lives only to spiral deeper into Horus’ great plan to get what he wants; total control over the hearts and minds of the people, and he’s willing to release an unstoppable reign of terror on the world to achieve it.

Can Andie and her friends work together to stop the resurrection of Chaos and Destruction before it’s too late? Or will the fate of the world crumble at its feet and everything she loves dissolve with the sands of time?

Fans of OUTLANDER, THE MUMMY, TOMB RAIDER, and STARGATE are going to devour the Kingdom of Sand & Stars series!
One-click Tempest Minds and dive into the magic today!
more
Amazon Other stores
Bookmark Rate Book

The 'Kingdom of Sand & Stars' series

All books by Candace Osmond  ❯