Secrets of the Sword 1 (Death Before Dragons #7) 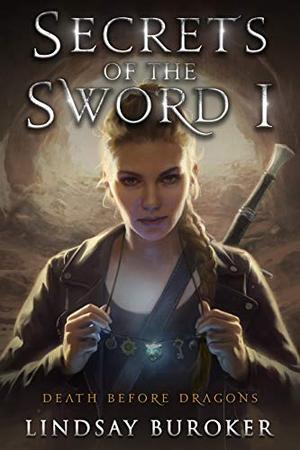 After helping my steady dragon Zav with his family problems, I thought life would get back to normal. As normal as it can be when you’re a hit woman responsible for hunting down bad guys.

That was before a strange artifact showed up in a bog and turned my ancient dwarven sword into a magical beacon. Now my enemies can sense it from hundreds of miles away. More than that, every club-toting, over-muscled orc, ogre, and troll who would like a magic sword can sense it.

Usually, fighting off opportunists wouldn’t be a problem (they don’t call me Ruin Bringer without reason), but even I can only handle so many attacks at a time. And Zav isn’t as much help as you’d think, since he’s busy on a quest for a ring.

No, it’s not a Lord of the Rings kind of quest. My boss put it in Zav's head that since we’re mated in the dragon way, we should also be married in the human way. Now, he’s off to find the perfect engagement ring. Given his taste in human footwear, I may be in trouble for more reasons than my marked sword.

Not only is there no chance of my life getting back to normal any time soon, but if I can’t figure out how to fix my sword, I’ll be dead long before I can get married.
more
Amazon Other stores
Bookmark Rate Book

The 'Death Before Dragons' series

Similar books to 'Secrets of the Sword 1'

All books by Lindsay Buroker  ❯

Buy 'Secrets of the Sword 1' from the following stores: