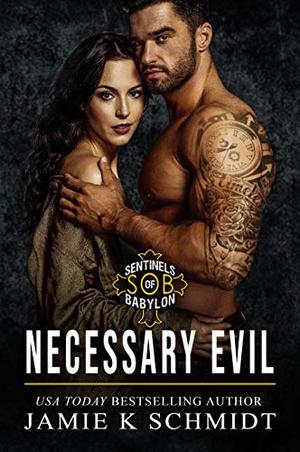 In this steamy series opener from bestselling author Jamie K. Schmidt—whose writing has been called “hot and sexy, with just the right amount of emotional punch,” by Lauren Layne—a vigilante biker takes the power of love into his own hands.

Lucy Simmons comes from a rough family, but she’s a damn good public defender. Even though she hates to see criminals walk due to sloppy police work, the law’s there to make sure everyone gets a fair trial, and Lucy certainly doesn’t believe in the kind of justice meted out by the leather-clad ex-cop they call “Evil.” He’s stubborn, cynical, and out of control—but he plays her body like no man ever has. For once, both Lucy’s boss and her brother agree: The biker is trouble.

Evan Villiers took a sacred vow to let no killer, rapist, or pedophile go unpunished. When scumbags fall through the system, his motorcycle club cleans up the garbage. Although the Sons of Babylon and their methods may not be to Lucy’s liking, the beautiful lawyer has become Evan’s light in the dark. But his next hit is Lucy’s own brother—a murderer who got off on a technicality. Now, with his loyalties split, Evan must turn his back on his brothers . . . or lose the woman who has claimed his reckless heart.

Includes a special message from the editor, as well as an excerpt from another Loveswept title.
more
Amazon Other stores
Bookmark Rate Book

The 'Sentinels of Babylon' series